Mongol soldiers who died of bubonic plague during the siege of Kaffa were hurled over the city walls with trebuchets in a bid to spread the disease to their enemies. Genoese historian Gabriele de’ Mussi claimed in The Great Dying of the Year of our Lord 1348 that this was the trigger for the Black Death in Europe, which killed 25 million people.

British soldiers used smallpox against Native Americans during the French and Indian War in 1763, and probably targeted Australian Aboriginals with smallpox in New South Wales in 1789.

The World War III that gripped imaginations for four decades was one of massed infantry, with Soviet and American tank divisions pounding each other, quickly followed by nuclear holocaust. Horrific as that would have been, biological and chemical weapons were considered beyond the pale – too nasty to use. 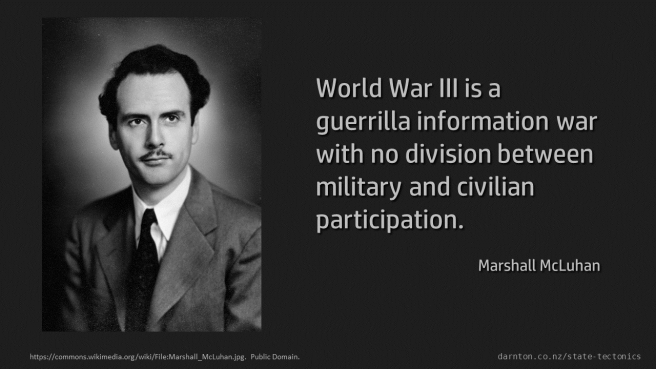 The World War III that we got instead was that described by Marshall McLuhan: “World War III is a guerrilla information war with no division between military and civilian participation.”

Modern low-grade information warfare doesn’t respect any of the niceties of traditional war between nation states. There are no uniforms, no distinction between soldiers and non-combatants, no prisoners are taken, no respect for borders, and no prohibition on the spreading of disease.

The measles outbreaks in Canterbury, Waikato, and Auckland, like others in Washington and California, are one more front in the information war pulling our political systems apart.

Social media have allowed people with fringe beliefs to find each other and recommendations algorithms tuned for virality push people to more and more material that reinforces those beliefs. Platforms like Facebook and Twitter have broken the manufactured consent that held mainstream politics together for decades. The disruption of the party line brought us Trump and Brexit. By the same mechanism, it’s no coincidence that recruitment of ISIS brides, flat-earthers, and anti-vaxxers has boomed at the same time. Measles has gone viral.

Anti-vaxxers are an eclectic bunch – some on the far left who hate “Big Pharma”, some on the far right who see mass vaccination as a government conspiracy. The original anti-vaxxers arrived alongside Edward Jenner’s original vaccines, opposed to the inoculation of humans with cow pox. Objections were often religious, claiming that preventing disease was interfering with God’s will. Satirical cartoons showed victims of inoculation sprouting bovine features from their arms, buttocks, and faces. 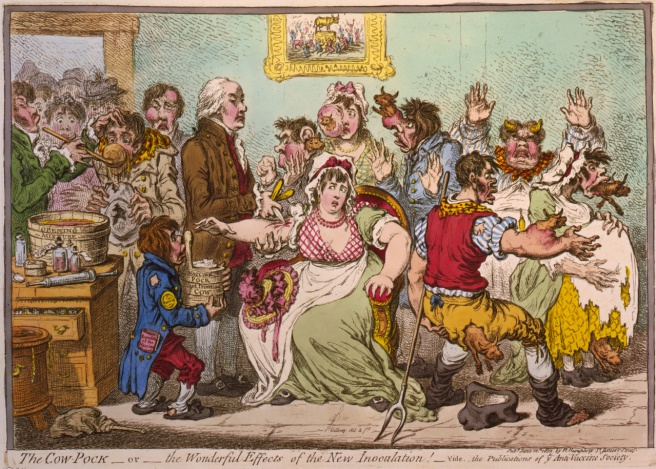 The number of people opting out of vaccination has rocketed upwards in the last twenty years. In parts of Los Angeles, some schools have opt-out rates of 60 to 70 percent. The vaccination rate in West L.A. is now as low as in South Sudan. South Sudan’s excuse is that it’s a poverty-stricken failed state in the midst of a civil war. In Beverly Hills, the local folk medicine prescribes kale smoothies as a cure for all ailments.

The foot soldiers in an information war often don’t even know that they’re participants in something bigger. They may simply be passionate about a single issue, pro or con. They may enjoy winding people up on the Internet for entertainment. They may be failing B-grade celebrities looking for a bandwagon to hitch their flagging fortunes to.

Others know exactly what they’re up to. Russian trolls are manufacturing a vaccination debate to sow discord in American society. They’re neither pro- nor anti-vaccination but argue both sides in an attempt to create division and distrust.

Facebook advertising is cheap and frighteningly effective, enabling strife in a way that wasn’t possible prior to the rise of social media. During the Cold War, fifty gigatons of Soviet nuclear warheads did nothing to reduce American power. These days, Russian intelligence agencies can organise riots on American streets with $200 worth of Facebook ads.

Analysis of bot-generated vaccination tweets shows an even split between pro- and anti-vaccination positions, as if the perpetrators are more interested in continuing the fight than in one side winning. Many of the tweets tie their reasoning to God, constitutional rights, or animal welfare – prefering topics that are already divisive, compounding the disruptive effect.

How do we make sense of things in a world where the manufacture of propaganda is cheap, easy, and global? Today, everyone is a publisher and instant communication connects everyone on the planet. We have to learn to live in an information environment unlike anything we’ve seen before.

Countering disinformation is extremely difficult. Throwing more data and more studies at sceptics is counterproductive. Explaining things to non-believers just reinforces their beliefs. The truth may be the only thing some people are immune to. But we can’t suppress disinformation either. Censorship is neither moral nor practical.

Marshall McLuhan’s guerrilla information war is in full swing. There’s no protection for non-combatants, no protection for children, and no Biological Weapons Convention. Spreading disease is just another day at the office for a Twitter bot.