“Trump is Hitler,” screamed the more excitable parts of the media throughout 2016. The logic seems to be: everything unlikeable is “fascism”; Trump is especially unlikeable and therefore must be especially fascist. You don’t get more fascist than Hitler, ergo …

This is reflex rather than thought. If we’re really looking to compare Trump to an historical German, Martin Luther is a much better candidate.

I recently watched a CNN series on Netflix called Race for the White House. It covers six presidential election races from the last couple of centuries, usually races where an underdog has won, and examines what happened. In two of the six cases, the winner was not just an unlikely candidate, but an entirely new political party emerged.

More often than not, a change in communications technology has led to the upset, although this wasn’t explicitly called out by the show. CNN may not want to admit that dominant media can rapidly become irrelevant. 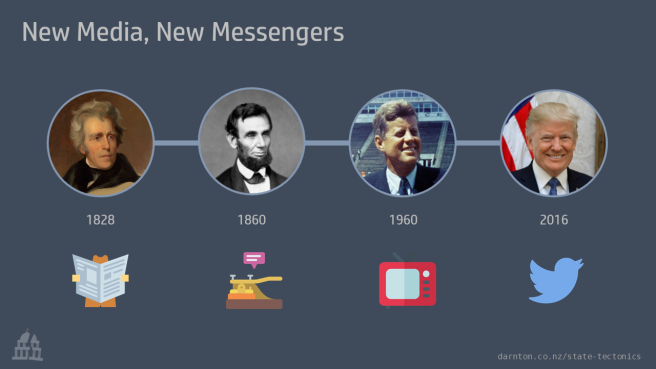 In 1828 Andrew Jackson became the first ever Democratic Party president, beating out the incumbent John Quincy Adams. Adams was an old-style aristocratic leader, not interested in anything as crass as campaigning. Jackson knew that a popular election in a democracy could be won by appealing to people and used newspapers effectively for the first time.

The Republican Party got its first president in 1860 – Abraham Lincoln. Lincoln was a captivating speaker, but his team also knew how to get his words out quickly to a national audience using the telegraph.

JFK was famously the first television president, beating out Richard Nixon, who was clearly uncomfortable with the new medium.

Jackson and Lincoln both used new technologies to bring new parties into power. JFK didn’t bring a new party into power, but the new civil rights era Democratic Party was a new thing in an old skin, nothing like the Democratic Party of the Old South.

The archetypal example of a new communications technology overthrowing incumbents is, of course, the Reformation. A dominant institution, the Catholic Church, and its political system, feudalism, met their match in Martin Luther. Luther and his Protestants used Gutenberg’s newly-invented printing press to great effect, producing huge numbers of pamphlets written in German rather than Latin to spread their message.

Luther was a 16th-century shitposter extraordinaire. Infamous for his short temper and way with words, Luther would have nailed Twitter. 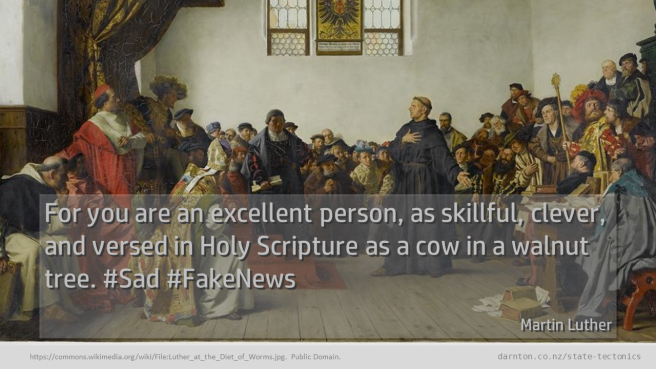 Trump and his supporters see the modern political system as decayed and corrupt, in much the same way as the Church was seen five hundred years ago. They want to see America taken back to its glory days, some mythical bygone golden age, to “Make America Great Again”.

Luther set off a revolution that created the modern world, but that’s not what he was trying to do. In a similar vein to Trump, he thought that the “modern” (i.e. 16th century) church had become decayed and corrupt. Despite his fascination with Gutenberg’s press, the most modern communications tool available in late-medieval Europe, his revolution, like Trump’s, was backwards-looking. He wanted to revert the Church to its lost golden age. He wanted to “Make Christendom Great Again”.

Ultimately, Luther set Europe on a track that led to the world as we know it today – nation states, democracy, and the scientific revolution. But that was completely unintended. And to come out the other side, Europe had to suffer through the Thirty Years’ War, a war that killed a quarter of the population of Germany – half the population in some areas – and many more outside Germany. Its embers still flicker.

As our decrepit, debt-ridden democratic welfare states totter toward their failure, we have no idea what’s going to be on the other side of the upheaval. The modern state is decayed and corrupt, built on top of technologies that have irreversibly shifted, and the world is changing, as it did during the Reformation.

Knowing what happened five hundred years ago should make us think about the path we take from here. The biggest question in politics today is: how do we get to where we’re going without another Thirty Years’ War?