From the archives: This article was first published in The Free Radical in 2003. The Virgin Cove resort was wrecked in the 2009 Samoan tsunami but the disaster I wrote about here was entirely man-made.

Our driver (also our cook), his kitchen-hand, and the petrol station attendant were all crouched in a pool of petrol, poking and pointing up behind the back wheel arch of our Isuzu four-wheel drive. The aim was to discover why we had flooded the station forecourt while trying to fill the tank.

An oily black emulsion coated the ground and petrol vapour saturated the air. Petrol vapour will only explode when the air-to-fuel ratio is close to 12 or 14 to 1. To test whether we were in this range, our driver started the engine. Having decided that an unexplained petrol leak was no real problem, we continued our journey to Virgin Cove – windows down to ventilate the fumes from the cabin, Spice Girls blaring from the stereo to … well, God knows why. Behind us the station owner strolled into action with his emergency spill kit, a glass 750mL Coke bottle half-filled with water, which he casually scattered across the ground.

This trip was the first occasion when I really got a feeling for the idea of “island time”. We had spent quite a bit of time meandering round the back streets of Apia looking for petrol. In New Zealand, the staff would probably show some concern if their petrol station ran out of petrol. In Samoa, it’s an excuse for them to spend an afternoon in the sun, happily waving off over-optimistic customers.

Superficially, the relaxed lifestyle is quite fun, but the downside is evident if you keep your eyes open. We drove past a very decrepit hospital. Some of the wards were built out of shipping containers. Propped up against one wall was a faded fundraising thermometer with the red line stalled at $30,000. The surrounding streets were densely packed with funeral directors.

Virgin Cove is inaccessible by public transport. We turned off the main road for the final leg of the journey to the resort. A cane suspended between two forked sticks barred access to the side road, which is maintained by the local village. More accurately, a toll is charged by the local village and the road is maintained by no one. For the final five kilometres of the trip we lurched, pitched and rolled along a low-speed jungle roller coaster.

Our trip to the south coast of Upolu, billed as an hour’s drive, took two and a half hours once petrol spills, ice-cream and donut stops, and tribal roadblocks were taken into account.

There are two types of accommodation at Virgin Cove – bungalows and fales. The main difference is that the bungalows are built out of building materials. Fales on the other hand are built mainly from leaves. Having grown accustomed to Western luxuries like walls and toilets, I had booked a bungalow.

The relaxed approach to time-keeping was mirrored by the resort’s loose record-keeping. Apparently I was the only person who had bothered to keep a record of my booking. Asking that we be accommodated now that we had been lured to the middle of nowhere immediately marked me as a problem customer. A complicated arrangement that involved us being shuffled from place to place each day was put together and we were shown the facilities.

We were asked to conserve water because most of the resort’s water comes from rainwater tanks. The fact that it had been pouring with rain for several days and there was still a water shortage wasn’t explained. In a sustainable society even plentiful things are scarce. To supplement the plentiful-but-scarce rainwater there was a pipeline from Sa’anapu, the nearest village, but the neighbours had tapped into it. Obviously their rainwater tanks (a generous gift from the government of Japan) weren’t big enough either.

As it happened, there was no temptation to use much water. All the showers were supplied with cold water only and the “private” showers associated with the bungalows were outdoors – taps bolted onto the side of a tree.

Electricity was in even shorter supply than water. Each building was equipped with a 12-volt light bulb that threw out about the same amount of light as a cigarette. To add to the rustic look, the bulbs were surrounded by light shades made of lumps of bark. Just enough light managed to escape to attract a cloud of sharp-eyed insects.

All of the electricity was generated from solar panels that were hooked up to a bank of car batteries. Exactly how a great pile of lead-acid batteries is supposed to be environmentally friendly is beyond me. The manufacturing process for silicon solar panels is hardly the cleanest activity on the planet either. Presumably their attraction lies in the fact that they generate the most expensive electricity in the world and so their widespread adoption would bankrupt most industries.

The real highlight of this tour of ecological infrastructure was the ablutions. One of Virgin Cove’s greatest selling points is its use of composting toilets. The advertising literature also mentions that they grow much of their own food. Just how tight this little recycling loop is wasn’t mentioned.

The toilet block is plastered with notices asking people to turn off the lights when not in use (signed by the Solar Power Manager) and to close the lids of the toilets (signed by the Composting Toilet Manager). Personally I thought that turning the light on at any point was a bad idea. The walls that weren’t used for notices from the eco-police were decorated with colourful artwork. The toilet doors were painted with green turtles and the obligatory dolphins. The opposite wall was covered in a mural of fat women holding hands. 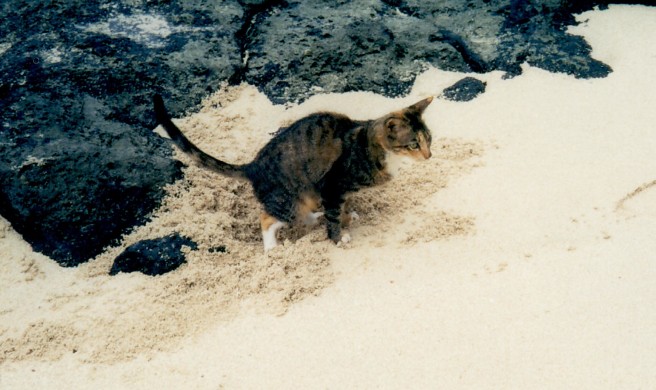 The resort is supposed to be a showcase for sustainability. Whenever in future I hear politicians talk about creating a sustainable society my mind will snap back to Virgin Cove. I will break out into a cold sweat and imagine an entire country run the same way – a society constantly short of water and electricity, where the citizens live in constant fear of the next edict from the Minister for Composting Toilets.

Virgin Cove is presumably named for the state of its beaches, which are, buried cat excrement aside, quite stunning. Black volcanic rock divides fine white sand beaches into small private sections. The Pacific Ocean breaks against a reef near the horizon and the beaches front onto a warm, gentle lagoon. This is the good bit of nature; the bit that doesn’t itch, bite, or smell funny. Walking a few hundred metres up the beach to the East brings you to the local village Sa’anapu.

The main economic activity in Sa’anapu appears to be manning roadblocks. All of the access roads have a fale built at the entrance that is occupied by six or eight people to collect tolls, assist in collecting tolls, supervise the collection of tolls, lift the barrier, and all of the other various jobs that go along with a complex transport-impeding operation. This is obviously a very important industry as the matai, or village chief, is head road-blocker on the least appallingly maintained track into the village. What’s not obvious is why anyone would want to pay between five and twenty dollars to drive down a road that doesn’t lead anywhere else.

When I was about six or seven, I struck upon the brilliant idea of placing an entry charge on my bedroom door. This had a couple of effects. First was the disappointment I suffered when I found out that this wasn’t the popular attraction that I thought it might be and I wasn’t showered with great wealth. Second was that my room didn’t get cleaned. The notice was duly removed before it deterred Santa.

Santa doesn’t seem to have visited Sa’anapu for quite some time. Nor have the residents been showered with great wealth. Nor had my mother been round to tidy up their village recently although it certainly could use it.

Sa’anapu has the great misfortune to be in the middle of a conservation area. There are some apparently very important mangrove swamps in the area and so development opportunities are limited. Apart from the roadblocks, the only other income opportunity is giving “free” tours to visitors. The village tour is billed as free but a “custom fee” is required if you do anything interesting, like look at the swamp.

The village itself is a picture of poverty with primitive tumbledown buildings, water-logged roads, and filthy sanitation. For a conservation area, there is a lot of rubbish strewn around the place. One far-too-earnest Westerner explained to me that it’s not their fault; they just need to be educated. I thought that they just needed decent shelter, running water and health care. I suspect that having some eco-weenie playing school prefect and telling them to pick up their litter is quite far down their list of priorities.

Samoa, home to Robert Louis Stephenson in his final years, bills itself as the Treasure Islands. In truth it’s more like the Jekyll and Hyde islands. The public face is one of sublime natural beauty and a leisurely lifestyle; those elements are easy to find. The other side of the tale is one of a third-world country where most people subsist in poverty, unable to escape. How the latter came to be a tourist attraction I will never understand.