Before social media professionals grabbed control of the United States and gnawed at the foundations of the European Union with their pervasive tracking, personality profiling, and hyper-targeted ads, came a bunch of amateurs who had no idea what they were doing. I know this because I was one of them.

In 2006, an opportunity to hack away at the establishment presented itself and I took it. If Trump was a magnitude-eight quake that tore a rift through the political world, ten years earlier I was a tiny foreshock. The sort of thing that a political geologist might have recognised but that to everyone else was an inconsequential bump. It wasn’t much, but this early social media campaign had far more impact than all my previous late-night attempts at proving people wrong on the Internet.

I was leader of the Libertarianz, a tiny political party in New Zealand, which, to date, had achieved pretty close to nothing. We held a position that about 2% of the New Zealand population agreed with and, of those 2%, 1.95% didn’t want to vote for someone who wasn’t going to win. I lived in Lower Hutt but stood for Parliament in Wellington Central, which meant I couldn’t even vote for myself. 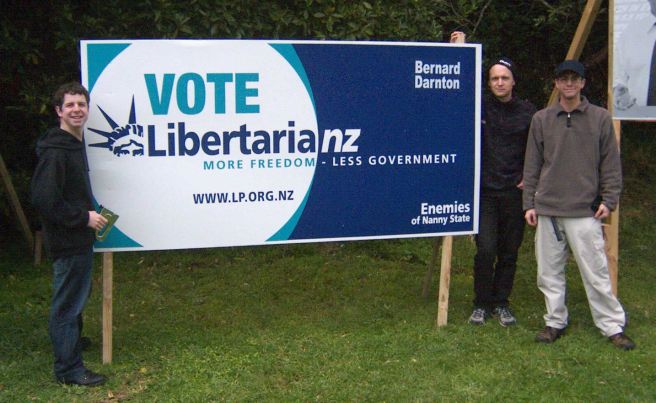 In the wake of the 2005 election, both major political parties – Labour and National – were immersed in accusations of improper election spending. By far the biggest offender was the ruling Labour party. They had spent public money distributing campaign material – a “pledge card” that detailed their election promises. Spending taxpayer money on election material violated the Public Finance Act.

The Police decided not to prosecute, but as the leader of a party that had contested the election, I had the standing to ask the High Court to declare the spending illegal. I was having no luck at the ballot box, so why not try the witness box?

In June 2006, I launched my lawsuit, suing Helen Clark, the Prime Minister of the day, and other members of the Parliamentary Labour Party over the misappropriation of public funds. The suit was announced not by press conference or on television but in a blog post.[1]

The entire pledge card campaign was conducted online, a novelty at the time. I ran the campaign from the “Darnton vs Clark” blog and others picked up the stories. We collected donations via Pay Pal, posted on You Tube, and sold a copy of the pledge card in question on Trade Me, New Zealand’s eBay, which hosted a vibrant Q&A section.

This arrangement mirrored the set-up of the Libertarianz political party, which was not much more than a Yahoo Groups email list supplemented with the required Annual General Meeting-cum-booze-up and the occasional scramble to keep the membership above the 500-member legal minimum.

Despite the almost total lack of resources and ad hoc organisation the campaign had far more impact than anything else we’d ever done. The lawsuit was so embarrassing to the government that they passed retrospective validating legislation[2] under urgency to ensure that the case was never heard in Court. Having legalised the spending there was no debt to repay and yet, under public pressure, the Labour Party paid a “gift” of $824,524 to the Parliamentary Service, a huge drain on the Party’s resources.

We weren’t the first people to use social media to undermine the establishment. Nor did I explicitly realise that that’s what we were doing. We were simply using the only tools we could afford.

We averaged something like 0.03% of the vote in general elections. I was used to running campaigns and trying to get media attention to no effect. It was exhilarating to have the government on the ropes with no money and no media, not much more than a cheeky blog.

The pledge card lawsuit showed the power of social media long before the general public knew what was going on. The Internet was starting to undercut traditional media in a double whammy. E-commerce sites hit newspapers in the wallet as car, property, and second-hand goods classifieds moved online. Blogs gave the public an alternative place to find news – or a place to find an alternative to news.

But the pledge card campaign wasn’t a purely “new media” exercise. It was a blend of new media tools and old methods behind the scenes. High Court cases are not free. There is legal research, filing and service fees, and pinot noir at The Northern Club to pay for. I was cheerfully and deliberately ignorant of where most of the money came from, but it wouldn’t have tested my psychic powers too hard if I’d wanted to think about it.

Most of the online activity was arranged through an email group called ‘the Vast Right Wing Conspiracy”, gleefully named after a complaint that Helen Clark had made about critics of her government. After the success of the lawsuit, in PR terms if not in any legal sense, the VRWC wanted to double down. It became apparent that the position of Libertarianz in this new world was to be the nastiest, most deniable end of the National Party dirty tricks department. We chose to have no part of that, bid our farewells, and slid back into irrelevance.

The party folded shortly after the 2008 election. My children arrived, I moved to Christchurch, and my fifteen minutes of fame faded into the past. Helen Clark went on to head the United Nations Development Programme and “the time I sued the Prime Minister” became an after-work drinks story.

The VRWC’s later exploits manifested most clearly in the notorious Whale Oil blog, whose rise and exploits were detailed in Nicky Hager’s book Dirty Politics.[3] Whale Oil specialised in the no-rules-of-engagement information warfare that we’ve come to expect from social media, with personal attacks, party in-fighting, and a loose relationship with the truth.

In 2006, we revelled in the freedom of many-to-many politics, where there were no gatekeepers telling us what we could publish, where we could move quickly and do what we wanted, and where our opponents seemed clumsy and inept. The ruling party broke the law and we held them to account in the court of public opinion if not the actual High Court of New Zealand.

In the intervening decade, social media has come into its own, from mischief-making to Commander-in-Chief-making. Broad-church political parties in the US and Europe have been thrown into chaos by people either working around existing bodies or hijacking them.

Nobody in the Republican Party establishment wanted Donald Trump as their presidential candidate in 2016. Jeb Bush was their man. Alexandria Ocasio-Cortez defeated Democratic Caucus Chair Joe Crowley in the primary for New York’s 14th Congressional District with no infrastructure. Her personal Twitter account has five times as many followers as the Democratic Caucus of the United States Congress. Nobody knows who the new Democratic Caucus Chair is, but everyone’s heard of “AOC”.

Aside from a light sprinkling of Jacindamania on the front cover of Woman’s Day, New Zealand has very little in the way of personal branding in politics. The New Zealand First party is a one-man band but its over-60s demographic is not big on Instagram. Very few New Zealand politicians make any attempt to connect with the electorate on Twitter. Who will be the first New Zealand politician to make it big on social media? It will probably be someone I’ve never heard of.

Enjoy the relative civility of New Zealand politics while you still can. The chaotic politics that has taken hold overseas is inevitable here, if for no other reason than shit-stirring is such bloody good fun.