I didn’t even know the census was on, between no longer watching the broadcast TV news nor getting the newspaper and having an ad-blocker in my web browser. It used to be easy for the government to get its “public service” messages out, but no longer. One of the many ways centralised control is failing in a fractured mediascape.

Statistics New Zealand’s failure to successfully take stock has bothered some but failure to take a census isn’t all bad. Sometimes taking a census is downright sinful. 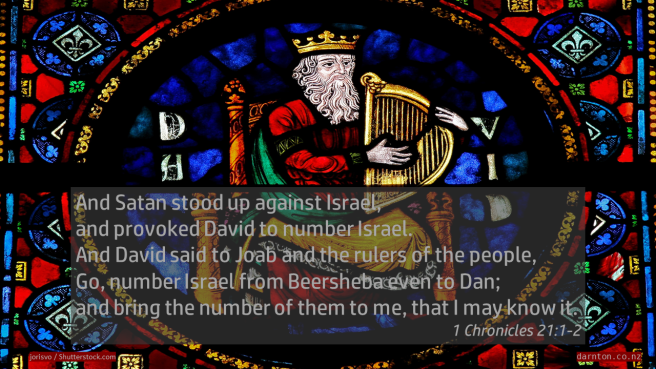 King David’s pride caused him to perform a census of his people and land. As punishment, God gave King David the choice of famine, war, or plague. David chose the plague and 70,000 people died. Better adjust that headcount downwards. There’s a bullet that Stats NZ has dodged for us.

Twentieth-century censuses are better documented, as evidenced by the 62-page notes section at the back of IBM and the Holocaust. Having accused one of America’s largest corporations of complicity in one of modern history’s greatest crimes, author Edwin Black remains surprisingly un-sued.

Black details how IBM and its German subsidiary helped the Nazi government tabulate census data in order to round up Jews for transportation to concentration camps. The part of the book that most sticks in my mind is what happened during the occupation of France. 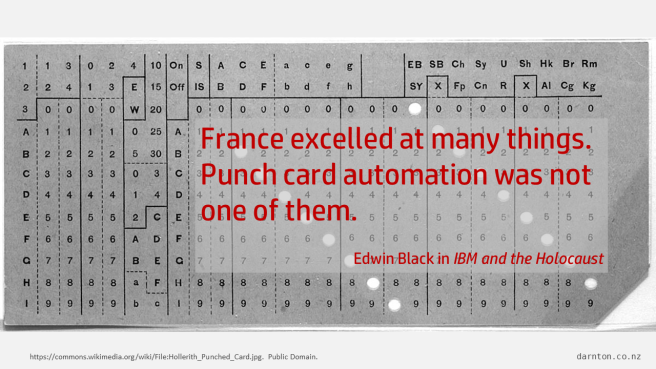 Germany is stereotypically efficient and is the sort of place you can imagine being able to run a census. France is more of a knock-off-at-four-thirty-for-drinks type of place.

If you were a European Jew in 1940, this was a critical difference. In places with detailed, organised census records, the Holocaust cost the lives of 90% of the Jewish population. In France it was more like 25%. The shambles of French official statistics saved countless thousands of Jewish lives.

The one French official who seemed to know how to operate the tabulating machinery, René Carmille, turned out to be working for the Resistance. After a two-year attempt to run a census, his office had neglected to collect the crucial Jewish identity data. It had, however, managed to put together a secret register of 300,000 World War I veterans ready to  mobilise for liberation after D-Day.

Capable people are dangerous – you’d better hope they’re on your side. Ineptitude is often the best we can hope for.

Sometimes I worry about all the data that Five Eyes hoovers up from social media and phone records but I’m comforted by the idea that they probably have no idea what they’ve got and, if they did, no idea what to do with it.

No doubt, many people and organisations find census data to be a useful tool and will be upset by the shambolic 2018 census. I am more sanguine. The benefits from a census are small and known. But the costs when things go bad can be extreme. Collecting vast troves of personal data is the sort of activity investors call “picking up pennies in front of a steamroller.”

Trading small, known benefits for unlikely but catastrophic loses eventually leads to ruin. I, for one, cheer on the ineptitude.