Next: Elliptic Curves over Finite Fields »

Elliptic curve point addition is an operation on two point that results in a third. However, it doesn’t work the way you might intuitively think. We don’t just add the xs and ys. There are various rules for point addition depending on the relationship of the two points to be added. 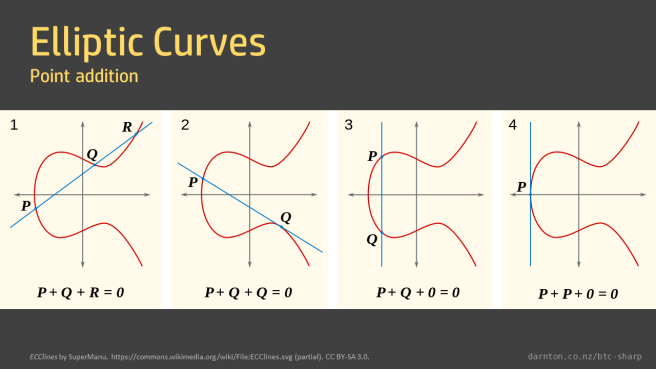 The meaning of each of these cases is covered in the book.

The Point At Infinity

In the previous post where I created the EllipticCurvePoint class, I said that I’d made the y parameter nullable. This is to model the idea of “the point at infinity”. A vertical line intersecting the curve twice is regarded as also passing through the point at infinity.

and that any point added to its inverse, i.e. any point minus itself, results in the point at infinity

This gives us the first couple of cases to model for our addition operator.

The derivation of the formulae for finding the gradients of these lines and, from there, where they intersect with the curve is somewhat involved and covered in detail in the book.

It’s worth reading through the explanations in the book, because repeated point addition on the bitcoin elliptic curve will be used later, in the cryptography section, to generate signatures.

With the formulae derived we can implement the rest of the addition operator.

There are tests to cover each scenario.

Of course, as good TDD practitioners, the tests were written first.

Next time, I’ll combine the FiniteFieldElement with the elliptic curve code.

Next: Elliptic Curves over Finite Fields »