« Previous: Start at the Very Beginning

Next: Big Numbers Are Big »

It was a bright cold day in April, and the clocks were striking thirteen.

Clocks striking thirteen signify a world gone mad. The opening line of George Orwell’s 1984 is unsettling because in the familiar world, clocks have circular faces; they go round to twelve and then loop back to one again.

The maths that describes how clocks work is the same maths that underpins cryptography, which, if we’re lucky, will help prevent the dystopia foretold in 1984.

Subtraction works in a similar way. Six o’clock minus eight hours would make negative-two o’clock, but that’s not a thing so we add twelve and arrive at ten o’clock.

Think of the result of the modulo operation as the remainder of an integer division. When the numbers divide evenly, the remainder is zero. 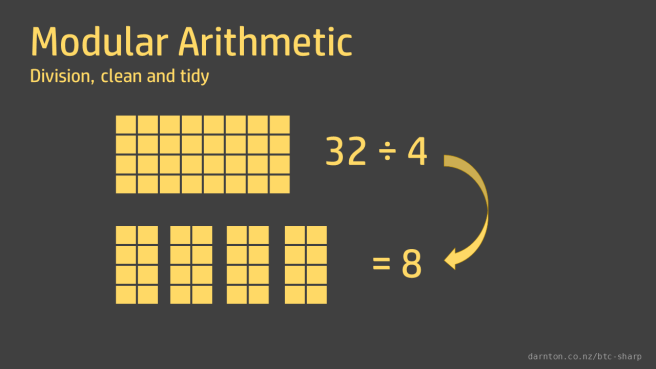 When the numbers don’t divide nicely we get a remainder.

For positive numbers this remainder is the result of the modulo operator we’re looking for.

The first fish hook we come across in translating Programming Bitcoin’s Python into C# is when we try to work out the modulus of a negative number.

The Python example given is this:

If you try the same thing in the C# interactive window, you get:

That’s because, in C#, ‘%’ is the remainder operator, not a modulo operator. If both numbers are positive it works as expected, but if the dividend, the number being divided, is negative, the remainder will also be negative.

Because the absolute value of the remainder will always be less that the divisor, the simple fix for this is to add the divisor and take the modulus again.

In the spirit of Don’t Repeat Yourself, I created an extension method to do this:

Alongside, in the spirit of Test Driven Development, I wrote some tests:

Note the parentheses around the -5 in the second test. If you leave them out, the function call will happen first, followed by the negation, and you’ll get the wrong answer.

With the modulo operation sorted out we can start creating finite fields.

« Previous: Start at the Very Beginning

Next: Big Numbers Are Big »