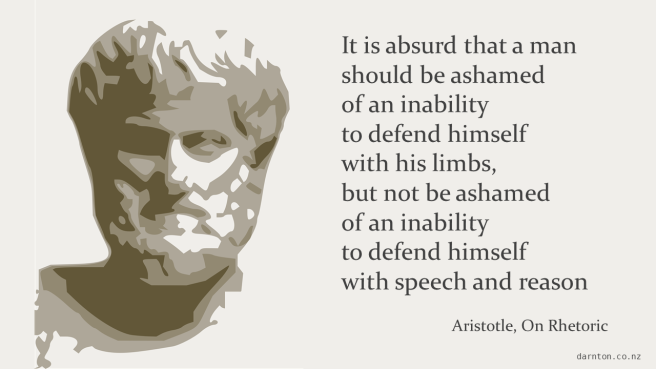 Ideas are the most valuable things we have but those ideas are worth nothing if they don’t make the leap from your mind to someone else’s mind.

It’s not only a matter of launching your ideas out into the world. They need to be packaged in a way that makes them memorable.

This post is derived from a persuasion workshop I ran in person at a public speaking group in my home town of Christchurch in New Zealand.

It includes exercises you can do to make your speaking or writing more persuasive. Download the worksheet PDF.

I was trained as a scientist – I have a physics degree – and I work as a software developer. My natural inclination is to regard facts and logic as the only things that matter.

I’ve also dabbled in politics. Years ago, I stood for Parliament for a tiny party you’ve never heard of. I went to meet-the-candidates meetings and did interviews and argued my points rationally. It had no discernible impact.

For many years I’ve been involved in Toastmasters and have given speeches on all sorts of things. My favourite presentation style is the informative speech – taking a complex or technical topic and presenting it for a general audience. Making things simple is good as far as it goes but simple doesn’t always mean interesting.

No doubt many of you have been in similar situations. You’ve had something important to say, you’ve had all your facts together, but … it’s flopped. It’s disheartening. What can we do about it?

From the Other Side

Think about it from the audience’s point of view. When was the last time you changed you mind? I mean, really. We like to think that we’re open-minded but we don’t often change our mind. When we do it’s often not because of new facts.

In school we’re taught debating, with it’s point scoring and rebuttals. We’re taught to write essays with a set logical structure. We’re taught that arguments made of premises and conclusions are the way to persuade someone that something is true.

What do you want me to know or believe?

And then put down some supporting arguments.

What facts or data do you have to support your conclusions?

If you were going into a debate or writing a high-school essay, you could probably stop there. Let’s be honest: it would probably be dull and unconvincing.

Why We Resist New Information

We have a mental immune system that protects our minds from new information. When new information does get past, we try and fit it to the beliefs we already have.

We’ve had this mental immune system for hundreds of thousands of years, ever since we lived in tribes on the savanna. In those days, the tribe – possibly the only thirty to a hundred people you’d meet in your life – was everything. You lived with them, you ate with them, you slept with them. Changing your mind risked making you the odd one out. And if you were out, you were out. You’d have no shelter, no food, and no mate. For your survival, being right was less important that being part of the group.

When you have Christmas dinner with your family and someone says something you disagree with, do you correct them? Chances are you just keep quiet. Harmony beats truth.

It’s no wonder that persuasion is hard. If we’re going to be persuaded, we need to be confident that these catastrophes won’t happen.

The Art of Persuasion

If logic by itself isn’t enough, what does work? To find out, we go to Aristotle. Rhetoric is the art of persuasion and Aristotle literally wrote the book on it.

In Rhetoric, Aristotle described three main modes of persuasion: logos (reasoning, words, and logic), ethos (the speaker’s credibility), and pathos (the emotions and psychology of the audience).

To get past the paleolithic mental defences you need to demonstrate to your audience that listening to you won’t turn them into pariahs. If the person you’re trying to persuade isn’t going to get kicked out of the tribe and die a cold, hungry virgin, they need to trust you and believe that you’re credible.

At the start of this post I mentioned that the post is derived from a workshop I’ve run at a speakers’ group. It was presented as a simple statement of fact, but its real purpose was to provide a dose of credibility.

The need for ethos is why celebrity endorsements work. I have my mortgage with Westpac and I’m happy with that decision knowing that someone as professional, sincere, and humble as former All Blacks captain Richie McCaw does too. I know that I won’t get kicked out of the tribe for associating myself with such a widely respected local hero.

If you’re presenting, the person introducing you should build up some credibility in the eyes of the audience, but sometimes you need to be your own celebrity endorsement.

In You Talkin’ To Me, his guide to rhetoric, Sam Leith shows how public figures from popular American singers to notorious German chancellors use ethos to claim that they’re just like us.

Don’t be fooled by the rocks that I got
I’m still I’m still Jenny from the block.

German compatriots, my German workers, if today I am speaking to you and to millions of other German workers, I have a greater right to be doing this than anybody else. Once I stood amongst you. For four and a half years of war, I was in your midst. And through diligence, learning – and, I have to say, hunger – I slowly worked my way up. Deep inside me, I always remained what I had been before.

Politicians of all stripes are desperate to show off just how working class, or middle class, or just plain normal they are.

One of New Zealand’s most popular recent Prime Ministers, John Key, had no obvious political convictions, but most of the country agreed that he was the sort of bloke you could have a beer with. He was Prime Minister for eight years.

Look back at the two questions you answered earlier: what do you want me to believe and what supporting arguments do you have?

Now think about how you can get on side with your audience. Why should I believe you? What skills and experience do you have? Can you convince me that you and I have common interests?

Who are you? Why should I like, trust, and believe you?

As well as the logical structure of your message, you now also have credibility – a reason for me to listen to your message.

Unfortunately, showing that you’re credible and that you have the audience’s best interests at heart still isn’t enough. Even then, facts aren’t that persuasive. We often decide what to believe first and then add the facts on later, to support our decision.

How do we decide? Emotionally. And that’s where pathos comes in. Pathos is the emotional appeal of your speech. You need the logos – the facts – to act as decision support but the pathos is what does the work.

When you present, do you want to bring your audience along with you? To see eager eyes and receptive faces? Do you dream of standing in the centre of the red circle at TED and getting to the climax of your speech, knowing that the audience is right there with you? You need feeling, pictures, stories. 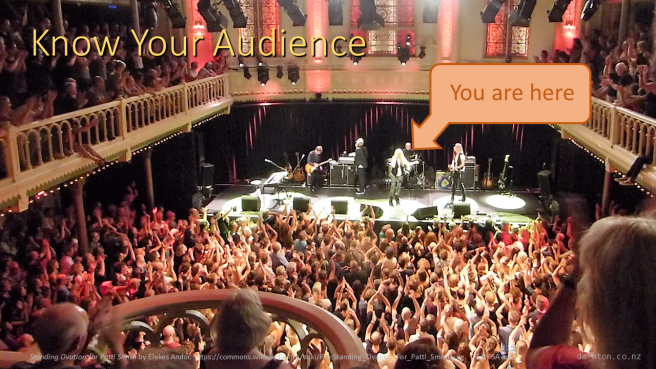 Make Me Feel it

My wife came home from the supermarket one day with a picture of a little girl from Guatemala. I can 100% guarantee that if World Vision had been handing out spreadsheets detailing third-world poverty instead of photographs of cute but undernourished children there would have been no deal. World Vision and Joseph Stalin agree on one thing: One death is a tragedy; a million deaths is a statistic.

How can you take your data and distill it into an emotionally compelling focus? World Vision takes a problem that seems too difficult to tackle – world poverty – and reduces it to a single child. No, you can’t solve world poverty, but you can help this one child. For just a dollar a day …

Make Me See It

What was Donald Trump’s number one policy during his 2016 presidential campaign? Every time I ask this question in a group, everyone calls out in unison, “Build a wall”.

Of course, it’s not a fully fleshed out policy. Will it be a wall or a fence? Will it run the entire length of the border? Will there even be a wall – is it just a metaphor for enhanced border security, whatever that means? It doesn’t matter. The point is that the wall is a physical object you can picture. Adding details to the policy would have detracted from the picture firmly cemented in your mind. 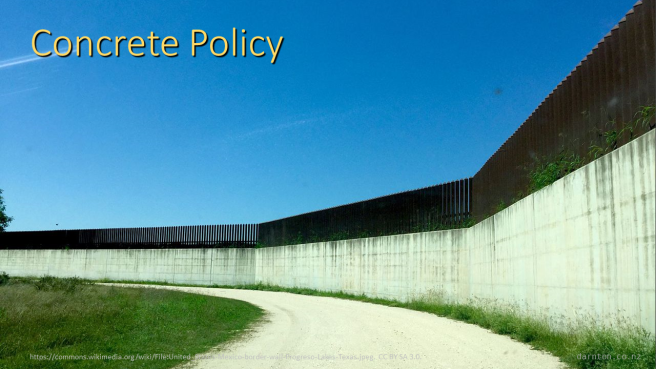 What was Hillary Clinton’s number one policy during the campaign? It’s very rare that anyone can answer this question with any confidence. Nobody doubts that she had policies, and that they were probably well-researched and well-developed, but nobody can remember any of them. There’s literally nothing to see here.

Pictures are powerful. Is there a concrete manifestation of your idea that you make me see? What image can you bring to my mind?

Tell Me a Story

Stories are memory glue. We’re far better at remembering stories that we are at remembering facts. We’re social creatures and we use a lot of brain power working out who did what to whom and why.

In the previous article on ethos, I told you that I had my mortgage with the same bank as Richie McCaw. A moment ago, I told you about my wife bringing home the picture of the Guatemalan girl. In the previous two sentences I didn’t tell you to use stories, I told you how I had used stories.

Stories, especially personal stories, illustrate the point you’re trying to make. They’re also far easier to remember. Since long before Call of Duty: Black Ops 4, or Survivor: Borneo, or the invention of writing, people have been sitting round campfires after dark telling stories. It’s part of who we are. How can you wrap your point up into a simple story to help it stick in my mind? 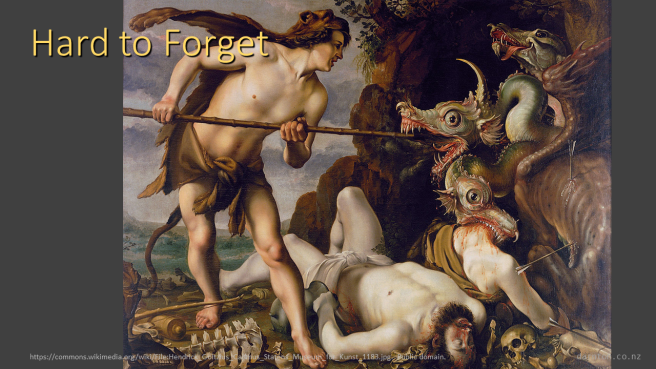 Look back at the questions you answered in part one of this article: what do you want me to believe and why should I like, trust, and believe you?

Now that you know what you’re going to say and you can help me think that you’re worth listening too, think about how you can make is stick with feeling, pictures, and stories.

What shared emotions can you arouse?

What visual elements can you make me see in my mind?

How can you make it personal? What stories can you tell?

The answers to these questions, along with the logical argument and personal credibility from part one, will give your writing or speaking a powerful boost.

Give Your Ideas a Chance

Saying that facts aren’t persuasive is not the same as saying that facts don’t matter. The point is that if you want your ideas to survive, they need to be nurtured with your credibility and your emotions. We need to hear and understand your ideas, but we also need to see them and feel them.

Use Aristotle’s three modes of persuasion to go from informative to persuasive and give your ideas the chance at life they deserve.